Surfing at the Cliffs of Moher

Surfing at the Cliffs of Moher

Surfing has become extremely popular along the western Irish seaboard, and particularly in Lahinch,
Fanore, Doolin and Spanish Point. In fact, one of the world’s biggest surfing waves can be found at the
Cliffs of Moher.

Aillenasharragh  – from the Irish, Aill Na Searrach (‘Leap of the Foals’) is the first headland of the Cliffs of Moher on the Doolin side and it reaches a height of 632 ft/192m.

With large ocean swells approaching the Cliff of Moher unhindered from relatively deep water, the large
slab of rock that makes up the reef at the base of the headland forces the waves to jack up and creates well-shaped but very heavy right hand barrels. The wave can range from 10 to 30 plus feet in height and has attracted expert and professional surfers from around the globe. What began as mainly a tow in (Jet Ski assisted) wave is now being paddle surfed regularly with jet skis only present for rescues or on the largest days.

The wave at Aillenasharragh was discovered by local enthusiasts in 2005 and, with a respectful nod to its origins, was christened “Aileens”.  This wave ranks as one of the world’s famous tow-in surf spots, along with Jaws in Maui, Teahupoo and the giant Belharra off the Basque Country.

The Irish Legend behind Aileens

It has been told that when St. Patrick introduced Christianity to Ireland there was anger among the reigning pagan gods, the Tuatha Dé Danann. They magically turned themselves into horses and galloped to Kilcornan in the Burren where they hid out in the Kilcornan Caves (‘the Cavern of the Wild Horses’). As time went by, there was no sign of the legendary Tuatha Dé Danann until one day 7 foals emerged from the caves.  Terrified by the bright light of day, they galloped along the edge of the Cliffs of Moher, and in blind fear they galloped straight over the cliffs at the point now known as Aillenasharragh – ‘the Leap of the Foals’. Sad ending!

Today, Aileens enjoys an almost mythical status and has attracted the best of the best to conquer its heights. It has now been tackled by some of the world’s best known surfers and it has also featured in the renowned surf documentary Waveriders and an Irish TV ad for Allied Irish Bank. 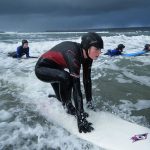