Hags Head is the name given to the southern point of the cliffs, where there is an unusual rock formation resembling a woman’s head looking out to sea. Irish legend tells many stories of an old hag (witch or “Cailleach”). Her names and variations are quite numerous. She is often linked to the golden fire goddess Brigit as her darker half Cailleach Bheara. At Hag’s Head, she is called Mal. 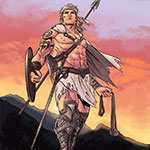 Mal fell madly in love with the great Irish hero, Cú (pronounced Koo) Chulainn. Sadly for her, Cú Chulainn did not return her feelings, finding her advances distasteful. He ran all over Ireland trying to get away from her, eventually ending up at Loop Head in south Clare.

Mal thought she had him cornered here, with nowhere left to run. But, seeing as he was a super hero, Cú Chulainn escaped by jumping back to the Cliffs of Moher using the sea stacks as stepping stones (as only a legendary Irish hero could..)

Poor Mal was not as nimble on her feet as the mighty Cú Chulainn – she tried to follow him, but missed her footing and was dashed to pieces against the cliff. She fell to her death at Hags Head where her blood is said to have stained all the sea.

The nearby town of Miltown Malbay was named for her and the “Wave” at Loop Head was also called after her “Tonn Mhal,”. This wave was believed to raise a voice of unutterable anguish, foretelling death and disaster.

So… Mal definitely left her mark on the area if not on her man!